By far, the talk that I am most requested to do is "Scrum and Kanban Like Chocolate and Peanut Butter". I've given the talk all over the US and Europe, most recently in Kiev for Agile EE. Invariably, people come up after the talk and ask how to get started with Kanban. I've given book and coach suggestions, but they are primarily pointers to pure Kanban resources.

Who is "Scrum and Kanban Like Chocolate and Peanut Butter" Intended For?
The first question is: when does it make sense to introduce Kanban where Scrum is already in use? It turns out that is a very complicated question. Rather than answer that question, I'm just going to gear my posts towards folks that match a certain set of circumstances. My material for introducing Kanban into an existing Scrum implementation is geared towards folks for which the following is true:
If you do not have all of the above, you may want to consider getting to this point first prior to taking any of the steps that follow. Over time I'll come back and update some of the points above with links to resources for addressing these points if they are not already true. The first post will be available over the next few days. The guide will be based on my talk "Scrum and Kanban Like Chocolate and Peanut Butter". If you want to get a head start you can check out a recent video of the talk which is available on vimeo.
Posted by Damon Poole at 10:17 AM 4 comments: Links to this post

The following books are the main books that I recommend as starting points for learning about the various aspects of Agile. While their is a fair amount of overlap each of them covers a specific topic. The one on leading self-directed teams is not strictly an "Agile" book, but it is one of the few books talking about self-managed/self-organized/self-directed teams that I have found. The Toyota way is also not an "Agile" book but does a great job of explaining the concepts of Lean which I believe are the foundation for Agile. 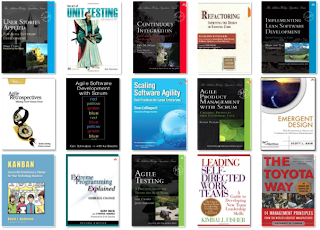 Posted by Damon Poole at 9:59 AM No comments: Links to this post